A politician who thoroughly deserves praise. I could almost vote for this man. 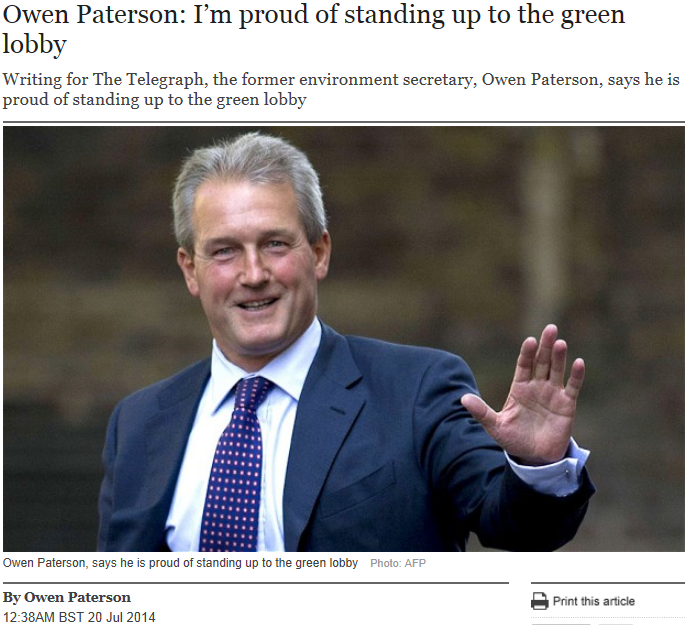 Every prime minister has the right to choose his team to take Britain into the general election and I am confident that my able successor at Defra, Liz Truss, will do an excellent job. It has been a privilege to take on the challenges of the rural economy and environment. However, I leave the post with great misgivings about the power and irresponsibility of – to coin a phrase – the Green Blob.

By this I mean the mutually supportive network of environmental pressure groups, renewable energy companies and some public officials who keep each other well supplied with lavish funds, scare stories and green tape. This tangled triangle of unelected busybodies claims to have the interests of the planet and the countryside at heart, but it is increasingly clear that it is focusing on the wrong issues and doing real harm while profiting handsomely.

Local conservationists on the ground do wonderful work to protect and improve wild landscapes, as do farmers, rural businesses and ordinary people. They are a world away from the highly paid globe-trotters of the Green Blob who besieged me with their self-serving demands, many of which would have harmed the natural environment.

I soon realised that the greens and their industrial and bureaucratic allies are used to getting things their own way. I received more death threats in a few months at Defra than I ever did as secretary of state for Northern Ireland. My home address was circulated worldwide with an incitement to trash it; I was burnt in effigy by Greenpeace as I was recovering from an operation to save my eyesight. But I did not set out to be popular with lobbyists and I never forgot that they were not the people I was elected to serve.

Indeed, I am proud that my departure was greeted with such gloating by spokespeople for the Green Party and Friends of the Earth.

It was not my job to do the bidding of two organisations that are little more than anti-capitalist agitprop groups most of whose leaders could not tell a snakeshead fritillary from a silver-washed fritillary. I saw my task as improving both the environment and the rural economy; many in the green movement believed in neither.

Their goal was to enhance their own income streams and influence by myth making and lobbying. Would they have been as determined to blacken my name if I was not challenging them rather effectively?

When I arrived at Defra I found a department that had become under successive Labour governments a milch cow for the Green Blob.

Just as Michael Gove set out to refocus education policy on the needs of children rather than teachers and bureaucrats and Iain Duncan Smith set out to empower the most vulnerable, so I began to reorganise the department around four priorities: to grow the rural economy, to improve the environment, and to safeguard both plant and animal health.

The Green Blob sprouts especially vigorously in Brussels. The European Commission website reveals that a staggering 150 million euros (£119 million) was paid to the top nine green NGOs from 2007-13.

European Union officials give generous grants to green groups so that they will lobby it for regulations that then require large budgets to enforce. When I attended a council meeting of elected EU ministers on shale gas in Lithuania last year, we were lectured by a man using largely untrue clichés about the dangers of shale gas. We discovered that he was from the European Environment Bureau, an umbrella group for unelected, taxpayer-subsidised green lobby groups. Speaking of Europe, I remain proud to have achieved some renegotiations.

The discard ban ends the scandalous practice of throwing away perfectly edible fish, we broke the council deadlock on GM crops, so decisions may be repatriated to member countries and we headed off bans on fracking. Judge me by my opponents.

When I proposed a solution to the dreadful suffering of cattle, badgers and farmers as a result of the bovine tuberculosis epidemic that Labour allowed to develop, I was opposed by rich pop stars who had never been faced with having to cull a pregnant heifer. (Interestingly, very recent local evidence suggests the decline in TB in the cull area may already have begun.)

When I spoke up for the landscapes of this beautiful country against the heavily subsidised industry that wants to spoil them with wind turbines at vast cost to ordinary people, vast reward to rich landowners and undetectable effects on carbon dioxide emissions, I was frustrated by colleagues from the so-called Liberal Democrat Party.

When I encouraged the search for affordable energy from shale gas to help grow the rural economy and lift people out of fuel poverty, I was opposed by a dress designer for whom energy bills are trivial concerns.

When I championed brilliant scientists demonstrating genetic modifications to rice to save the lives of hundreds of thousands of children in developing countries, I was vilified by a luxury organic chocolate tycoon uninterested in the demonstrable environmental and humanitarian benefits of GM crops.

When faced with the flooding of the Somerset Levels I refused to make the popular and false excuse of blaming it on global warming, but set out to reverse the policy inherited from a Labour peeress and serial quangocrat who had expressed the wish to “place a limpet mine on every pumping station”, while deliberately allowing the silting up of drainage channels.

When I set out to shatter the crippling orthodoxy that growing the rural economy and improving the environment are mutually exclusive, I was ridiculed by a public school journalist who thinks the solution to environmental problems is “an ordered and structured downsizing of the global economy”. Back to the Stone Age, in other words, but Glastonbury-style.

Yes, I’ve annoyed these people, but they don’t represent the real countryside of farmers and workers, of birds and butterflies.

Like the nationalised industries and obstructive trade unions of the 1970s, the Green Blob has become a powerful self-serving caucus; it is the job of the elected politician to stand up to them. We must have the courage to tackle it head on, as Tony Abbott in Australia and Stephen Harper in Canada have done, or the economy and the environment will both continue to suffer.

* Owen Paterson is a former secretary of state for environment, food and rural affairs.

Stick that up yer hoop, envirotards.