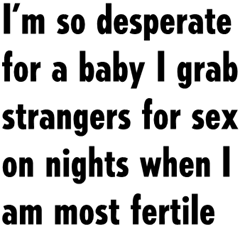 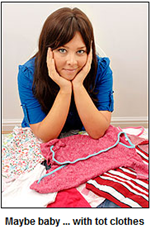 LARA CARTER has slept with 20 strangers in the past year – in a desperate and reckless bid to get pregnant.

The self-confessed "sperm hunter" uses ovulation kits to tell her when she is most fertile then pretends to be drunk, throwing herself at unsuspecting fellas and making it obvious she wants sex.

If Lara, 25, meets a man who wants to use a condom, she will offer one from her purse – which she has already pierced a hole in.

Lara, an assistant office manager, says: "This is absolutely the right time for me to have a baby and nothing is going to stand in my way.

"All my friends have babies and I desperately want to be a mum.

"I don’t have a steady boyfriend and feel my time to have a baby is running out. I only need a man to provide his sperm – I would have no interest in seeing him again. That is why I’m a sperm hunter."

It’s really difficult to know where to start, isn’t it?

With no regular boyfriend, Lara’s desire to have a baby has driven her to target strangers as potential fathers to her unborn child.

She says: "I’ve had a couple of proper relationships in the past two years.

"But each time I have mentioned the idea of having a baby, the bloke has run a mile.

"Men my age aren’t that interested in settling down with a kid so quickly into a relationship, so I have given up on trying to have a baby with a partner. I’ve looked into getting a sperm donation but it’s too expensive.

Men her age aren’t interested in getting shackled to someone who is quite clearly mental and a filthy duplicitous slag.

"My nearest private clinic costs £295 for a consultation then it would cost a further £2,000 for a donation.

"There are plenty of men out there willing to have a one-night stand for free."

Oh yes – and lots of free money and free housing for you to raise your little miracle.

I hope she turns out to be barren.

Remember guys – be careful out there. Always provide the condom and always make sure the contents can’t be retrieved after you’ve gone home.

Some of those women are mad, bad and dangerous to nob.

There’s much sounds and fury signifying nothing regarding this story (see last post).

In the mix, however, is the voice of reason, from Big Brother Watch, which explains why even those of us who are sick of benefit cheats should oppose the scheme the ConDems have planned.

The papers today all carry a story which first broke last month – the proposed use of credit rating agencies like Experian to catch people committing benefit fraud.

This is a very bad idea. Nobody approves of benefit cheats. But mining private data on a routine basis on the off-chance of catching people out is a disproportionate invasion of privacy.

There’s a presumption of innocence in this country, and trawling everyone’s credit data and treating us all as suspects brings that into question. Furthermore, there is or should be a bright line between the state and the private sector.

Taking powers of legal investigation and enforcement which ought to sit with the state, and granting them to private organisations, blurs that line. Worse still, if profit-making companies are rewarded by the number of people they catch they will have a perverse incentive to sling accusations in any even marginally plausible case – because they’ll have nothing to lose and potentially something to gain in the smearing.

Ultimately, it’s probably not in the interests of the companies either. People will be far less likely to comply with their requirements in the future if it’s known that one risks such intrusion in doing so.

That’s not the only reason, by the way.

Ah – so that’s going to be how the big society works is it? By encouraging more curtain-twitching, snooping and reporting?

A guaranteed provider of community cohesion and mutual trust, that.

Have a biscuit, Dave.

UPDATE: Words from the excellent Ed West at the Tellygiraffe: 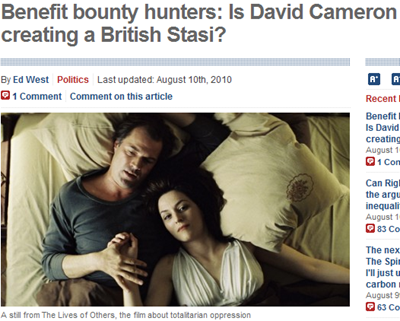 And.. blow me down with a vigorously wafted mackerel, from Tom Harris, of all people.

Peter Davey, 35, a father of seven, gave up work in administration nine years ago because he realised he would be better off on state handouts.

He and his wife Claire, 29, who is seven months pregnant, believe they deserve their £815-a-week benefit cheque and are open about feeling no guilt that they live at the expense of the taxpayer.

Their home, a semi-detached house on the Isle of Anglesey, is complete with 42 inch flat screen television, Sky TV at £50 a month, a computer and three expensive games consoles, as well as four mobile phones.

The family also run a Mercedes people carrier and an 11 seater minibus.

However, they still feel there is little to be grateful for.

Mrs Davey, who has never had a full-time job, told Closer magazine: "It’s hard. We can’t afford holidays and I don’t want my kids living on a council estate and struggling like I have.

"I don’t feel bad about being subsidised by people who are working. I’m just working with the system that’s there.

"If the government wants to give me money, I’m happy to take it. We get what we’re entitled to. I don’t put in anything because I don’t pay taxes, but if I could work I would.

"We couldn’t afford to care for our children without benefits, but as long as they have everything they need, I don’t think I’m selfish."

No – that’s right. You’re not selfish.

In 20 years, the only times I have been out of work are during a couple of sabbaticals I saved for by.. err… working. I claimed dole for about 5 weeks in 1993. After which I moved from the jobless north to the flourishing south, having been offered a job down here.

I have earned, and paid tax on, above median income for the last 14 years and have taken practically nothing out of the system.

Claire Davey has never had a proper job and her cuntish bloke ditched his 7 years ago.

Yet I’m the selfish one, because I like to earn money and use some of it to drive a nice car.

I want no part of this society: 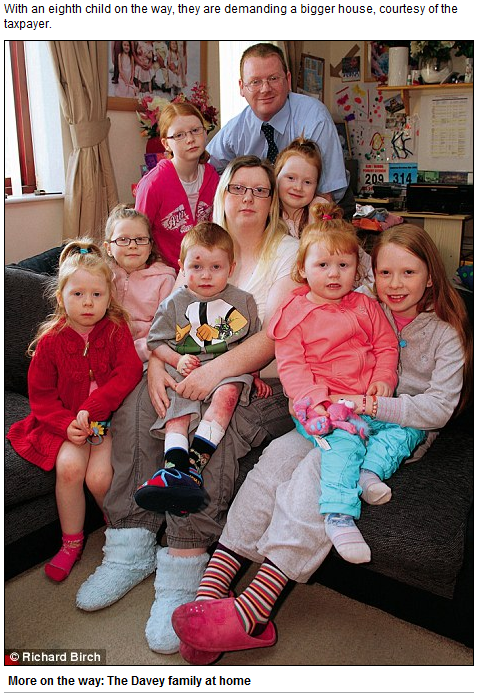 Despite filing for bankruptcy 18 months ago after racking up £20,000 of debt on mail order catalogues they still insist on splashing out on four presents per child at birthdays and last Christmas spent £2,000 on gifts alone.

‘Santa is always generous in our house,’ said Mrs Davey, who once applied to join the police but was turned down.

She insists her husband would do any job ‘as long as we could still afford the lifestyle we have now’.

Mrs Davey, who spends £160 a week at Tesco, says she does not intend to stop at eight children. Her target is 14.

And she adds: ‘I’ve always wanted a big family – no one can tell me how many kids I can have whether I’m working or not.’

The Government estimates it will pay out £19.6 billion in housing benefit during the 2009/10 financial year, according to figures slipped out on the Department for Work and Pensions’ (DWP) website.

I do have to tread slightly carefully here, because I don’t want to insult my good friend, the inveterate welfare sponger Mummylonglegs.

However, upon consultation, said legged lady has declared I’m wasting my breath, so let’s cut to the chase:

(The Benefits Trap) * (Uncontrolled Immigration) * (The EU) * (Scrouging Lazy Northern Bastards) = The most expensive bowl of Cuntsoup ever devised.