Don’t let the door hit your arse on the way out.

I’ll never forget what you did to my country, you deluded maniac. 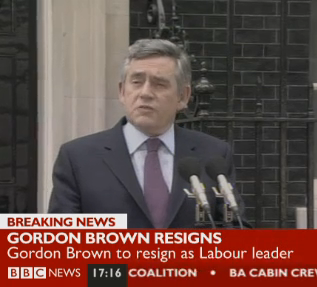 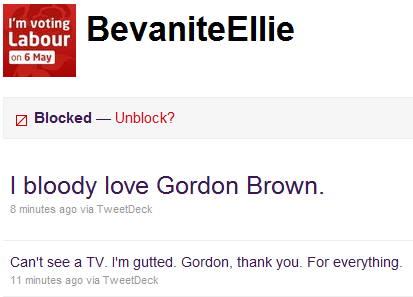 And some other twittage for your amusement: 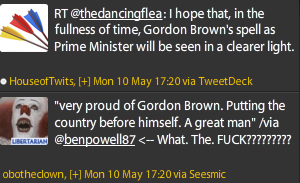 Not being familiar with the relevant law, I’ve not been able to find a definitive answer. However, I did find this:

In 2005 the Labour Party manifesto stated that the party remained ‘committed to reviewing the experience of the new electoral systems’ and repeated the 2001 statement that a referendum remained the ‘right way to agree any change for Westminster’.

The implication here is that while a referendum may have once been the right way, it wasn’t and still isn’t the only way that a change to the electoral system could be effected.

This leads us to a nightmare scenario – albeit a remote one. But we are in uncharted waters, with some of the most calculating and devious bastards in history squabbling for the helm of the vessel.

Others have written that a Lib/Lab coalition with Brown, or A N Other unelected leader, would so enrage the electorate that they could never win a referendum on voting reform and would thereafter be savaged at the next general election.

So, suppose the Lib Dems went into a coalition with Labour, Postman Pat installed at the helm.

They all want PR. Once they have it, their ‘progressive consensus’ will be de-facto obtained.

If they don’t need a referendum, why on earth would they hold one? Remember the Lisbon treaty?

Am I missing something here?

I’ve not considered the House of Lords, but I do know about Labour’s use of the Parliament act.

Which leave the Queen. Could she actually do anything?

The FT Westminster blog wields the spectre of BNP MPs, should PR be adopted. As I wrote previously, so be it.

It’s not entirely clear why said Twittist thought I’d know the answer, but I do have Google.

Hardly a groundswell, is it?

On the face if it, the implication is a valid one. These are seats where the number of UKIP votes is greater than the margin by which a conservative candidate was defeated. The table is from the above Con-Home piece, but updated* by me (red lines) to show one of the flaws in their premise.:

So UKIP no more ‘cost’ the Tories a majority than the BNP and Greens cost Labour a majority. Which brings me to my second point, and the second reason that UKIP did not steal the Tories’ victory.

People voted UKIP rather than Tory (as I did) because Cameron let us down over the Lisbon referendum and under him, the party has a pro-EU outlook. If the Tories had offered something of value to an increasingly Eurosceptic public, they could have won a comfortable majority.

Likewise, if Labour hadn’t been so arrogant and cack-handed over immigration for the last 13 years, they wouldn’t have haemorrhaged votes to the BNP.

To sum up then: It’s complete and utter cobblers.

* If you’re interested in playing with the numbers, they’re here on the Guardian’s Datablog.

It’s a theme I’ve enthused about before. You may even have noticed the link in my sidebar to the campaign for Scottish independence.

Minette Marrin, a columnist with whom I find myself in frequent and violent agreement, raises a point very salient to our current electoral dilemma.

Cameron got 306 seats (against Brown’s 258), just 20 seats short of an overall majority. But Brown’s 258 included 41 from Scotland (out of 59 Scottish constituencies). Without these Scottish seats, the Labour party would have got only 217 to the Conservatives’ 305 and Clegg’s 46 (to which he would be reduced if he did not have his current 11 Lib Dem seats in Scotland).

It would be interesting to see the latest on these figures, too:

At the end of 2006 a famous ICM poll found that 52% of Scots wanted independence from Britain, but also — startlingly — that 59% of the English favoured separation from Scotland. As far as I know there have been no polls about this thorny issue since.

Someone on Twitter (I forget who, forgive me) came up with a superb idea – referenda on PR, Scottish Independence and EU membership, all on the same day – and that was before we learned of the latest attempt to prop up the Euro with OUR money.

Such a clutch of referenda would be sheer, unmitigated joy.

UPDATE: Via @RantinRab hark at how well Labour did in Scotland. 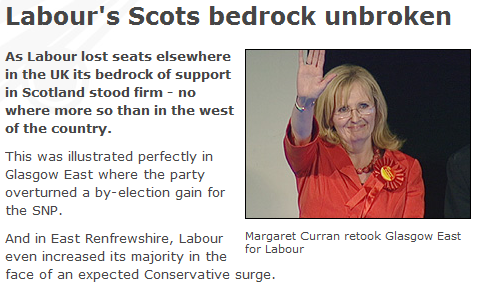 All told, it looks unlikely that a deal will be sealed by the time markets open on Monday. This will make Monday a very volatile day.

Charlotte Gore points out the hurdles and gates Nick Clegg must negotiate within his own party. On Radio 1 news today they called Clegg ‘the most powerful man in Britain’. He isn’t. He is in a Gordian knot.

Meanwhile, Cameron has his own internal struggle to manage. Backdrop is a (fair) assumption that PR spells the end of the party. A complete upheaval of the UK’s political landscape, with it. In the foreground, though, are complaints about Cameron’s leadership style – decisions are being taken by a small clique. Heir to Blair indeed.

Labour’s internal schism seems to have been papered over, at least for the interim while wagons are circled.

We need electoral reform. We need first to understand the implications of such changes.

Prima facie, I support Cameron’s plans to equalise the size of constituencies by voter numbers. I haven’t yet seen any calculations on how this election would have turned out in such a scenario, but if you have, please leave a comment.

Proportional representation is an altogether different proposition though. It’s one I may post separately about, or I may just refer you to those better qualified to comment than I.

A twittist pointed out earlier that

Perhaps, but if we had PR, people would have voted differently, due to the different tactics and implications involved in such a system.

After a period of flux after the introduction of PR, new political axes would emerge, around which socialists, democrats, libertarians, nationalists, theists, neocons and others can coalesce. New parties and alliances would be forged in the heat of change.

Can you see any other way that LPUK could become any kind of a force inside a generation?

Sure, the BNP may get a go at seats in Parliament, having polled more than 500,000 votes, but so what? They’ve had council seats – they lost them all on Thursday. They have a seat in the EP. They’ll lose it. The BNP has imploded over the last couple of weeks, without any external interference.

So if you want the right sort of radical representation, you also have to tolerate the wrong sort, be that BNP, EDP, CDP, socialist workers or whatever. At least, then, you get to have your debate, in Parliament, on TV, at the hustings.

Discussions and arguments of real substance, with real passion.

How could that be any worse than the 3 moribund Fabian dinosaurs that are currently carving up our future for their own benefit?