Tim Newman wonders why women haven’t fixed things for themselves, rather than standing there like entitled scarecrows, moaning that all the places they’ve invaded haven’t been made perfect for them. By men.

Aaron Clarey wonders why women have been told they need to take over the world like automatons, and why they go with the deluded leaders of the herd instead of doing what they apparently really want to do – have a family,

Having been buzzed by a prepubescent Godfrey Elfwick impersonator at the Spectator, Adam Piggott swats the fly, then continues about his business.

In commenting on the Michael Avenatti story, the Z Man touches on something I’ve been musing on for a while.

New social media not only makes it easy for stupid people to get on-line, but it makes it easier for grifters to exploit them.

That’s the truth about services like Facebook and Twitter. They did not invent the concept of social media or the public platform. Usenet was a very popular platform at the dawn of the internet culture. It’s fair to say the BBS was what initially drove amateur interest in the internet. Long before Mark Zuckerberg, message board communities were flourishing on-line, serving tens of millions of people. The thing was, you had to have a little savvy to reach these platforms and you needed some smarts to exploit them.

What the new platforms did was make it so a moron could get on-line. Phones come with Twitter and Facebook apps baked into the platform. In most cases, you can’t remove them even if you don’t use them. If you can operate a phone, you can be on these platforms, interacting with your fellow morons in minutes. What’s unique about this age is that the people who were encouraged to remain silent for most of human history have now been fitted with the tools to stand in the public square, bellowing like lunatics.

I have a post in the works expanding on this theme, which may or may not survive to the end of the writing process.

As a momentary diversion, I want to share this.

I’ve a passing interest in sim racing – aka driving games. You know… this stuff:

Anyway, there’s a guy called Jimmy Broadbent with a YouTube channel about this stuff, and he’s very good.

I bring this up because, as I watch Clarey meander through his livestreams making chump change through his superchats, a bloke in a shed in England is playing driving games and people are literally throwing money at him, often 5 and 10 bucks a time or more.

I find it grimly amusing, and I’ve no doubt Mr Clarey would be entirely unsurprised.

I take nothing away from Jimmy, BTW. He seems like a good lad and he sounds like a young Murray Walker as he commentates his ‘races’. And what would you rather be doing to earn a crust?

Now, what do you get if smash a 2.9V6 Ford Granada into a Rover SD1 V8, then pick through the parts, crowbar them into a hand-welded spaceframe chassis, and conceal that under a slab of fibre-glass, a spot of leather and wood and a glutinous excess of noxious adhesives?

You get a great weekend car for the summer and a terrible day to day proposition. The TVR V8S. 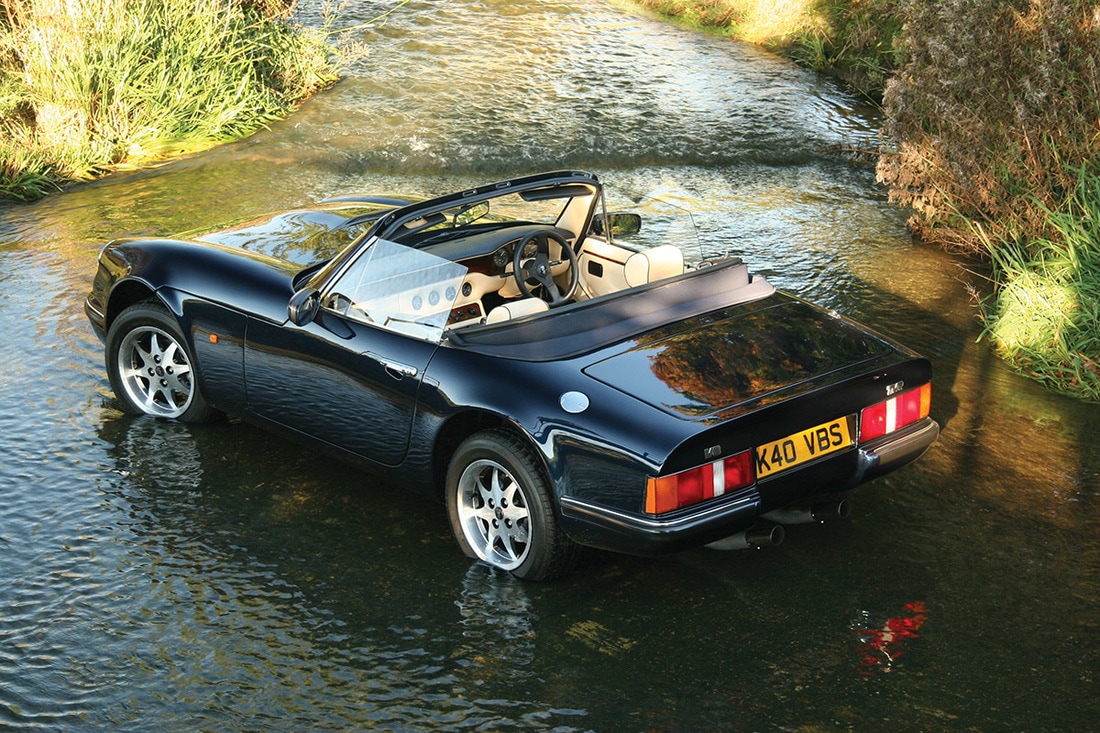 It’s not inconceivable that all this water came out the side of the engine.

Purely by an accident of birth does this car have seat belts and servo assisted brakes, so you can forget about power steering, ABS, air bags, crumple zones, speed limiters, lane assist, bollock massagers and ISOFIX.

Its opinions are solely expressed by the exhaust note and the wagging of its tail. As it should be.