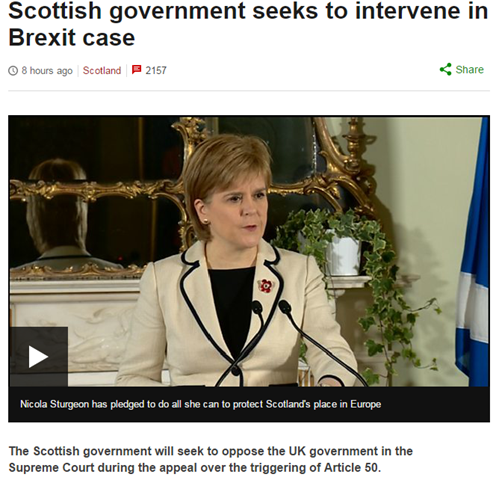 I have very mixed feelings about this.

On the one hand, it’s fairly unlikely that her intervention will be in any way successful. After all, the European Referendum Act was put through Westminster by the Secretary of State for Foreign and Commonwealth Affairs. By the terms of reference for Scottish Devolution, matters of Foreign Policy, Immigration and Trade & Industry are Reserved Matters, which means that they are the preserve of the UK Parliament, not devolved governments.

The Scotch will no doubt argue that withdrawal from the EU will have an impact on devolved matters (e.g. agriculture, environment, sport etc.), but I suspect they’ll be told to F.O. by the supreme court and/or the UK government.

Either way it’ll open up the divisions that are now sort of healing between England and Scotland, and it’ll give McPoison the lever she needs to call for a new Scottish independence referendum, with all the attendant pain and animus that comes with it.

And when that happens, the Scottish will, in all likelihood, vote even more resoundingly in favour of staying in the UK. This will be driven by a number of things:

And the consequence of this will be that after two straight defeats for the Scotch Nationalists, the question of Scottish independence really will be settled for a generation or more. And not in the way I (and a lot of English) would like to see,

That proportion of English who want to see the back of Scotland is only likely to rise if the Scottish government is at all successful in hampering our quest for Brexit, either by delay, compromise or outright veto. And the more successful we are in achieving a hard Brexit, the more animosity the Scottish will have for the English.It can’t end well.