The Twitter Outrage Bus is on the rampage about this: 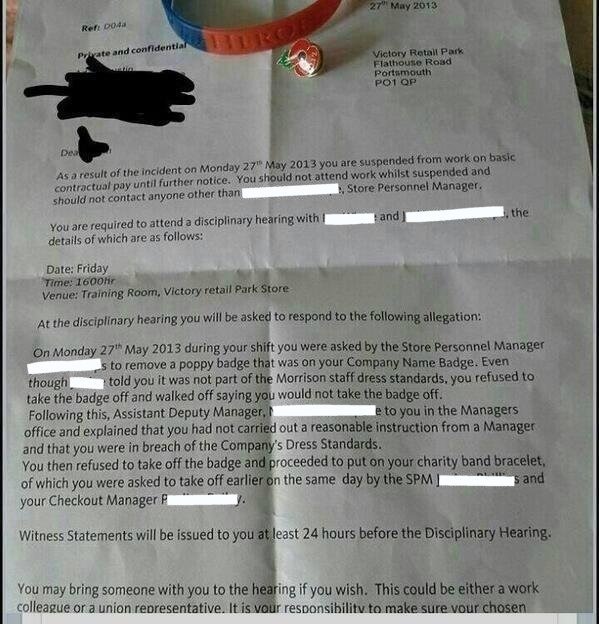 It is being taken at face value as genuine. I see no particular reason why. I see no letterhead or anything at all to indicate that Morrison actually even wrote or sent this letter. Let’s assume for a moment it is genuine, though.

I’m pretty sure we wear poppies in the second and third weeks of November in the UK. The letter is dated May 27th – today. I’m willing to bet the company positively encourage their staff to wear a poppy at the appropriate time of year.

As such, this is not about poppies or what they represent. Put that aside.

The letter indicates that when pulled up about the badge which is contrary to the dress code, the employee engaged in an overt act of defiance (charity bracelet). This says to me that the background to this is a wider pattern of questionable behaviour and attitude, rather than it being a simple case of being on a disciplinary for wearing a poppy badge.

This person agreed to the dress code in the terms of the contract when they took the job. Now they are not honouring their end of the contract. So suck it up.

The redactions in white are mine. Underneath those are the names of the management team in the store. This is being widely circulated. If the letter is genuine, and real people’s names have been published in this way, the person deserves to be fired immediately, and it would be entirely just. Publishing it with names exposed is unforgivable.