Melancholy would have been a polite way to describe my mood today, as a result of everything I’d read, seen and heard in the news, on Twitter etc.

Happily, my mood was instantly changed by one of the funniest things I’ve read in ages.

Obo has the full text, so I needn’t reproduce it completely.

It boils down to this: Some fuckwit middle-class nancyboy student who is at the Climate Camp at RBS HQ in Edinburgh had made a complete tit of himself.

Going by the name of Nick Martian on MySpace, and as @GodSaveTheEarth on Twitter, he published an exchange he saw on Twitter, which he goes on to spin into some ludicrous fascist conspiracy that he then published on IndyMedia.

Chief protagonist was forthright and ribald Twitterer @Wearethebritish who chose to brighten up a dull Saturday by winding up the tree-hugging numbskulls who were busy making a nuisance of themselves in Edinburgh. He appears to have scored a direct hit.

Several other twits, myself included, appear to have made into Mr Martian’s copy & pasted Twitter exchange.

His opening statement is just golden.

There appears to have been a deadly serious game of cat and mouse going on between environmental activists, a local Scottish journalist, and the right wing extremist who has been threatening violence against the Camp for Climate Action in Edinburgh.

Boasting that he is a professional soldier recently returned from fighting in Afghanistan where he says he killed Muslims for reading Islamic literature, and now posting his threats on Twitter under the name “wearethebritish” the extremist claims to have been using British Army military surveillance equipment to spy on the climate campers.

And what would this British Army surveillance equipment be, exactly?

@PoliticalFun "What surveillance equipment you got?"

That’s right. He has eyeballs. Whatever will they think of next? Ah – of course – contact the media via Twitter to alert them to the unfolding story. 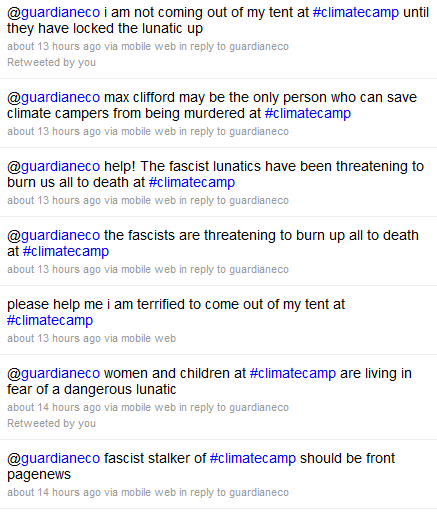 The commenters on Martian’s post have the measure of things, though.

The author has made an embarrassing idiot of himself

Lol. What a muppet. Im going to wipe my arse with Mk1 Toilet paper because i just shat myself laughing

Pretty much sums it up.

7 thoughts on “One born every day”