While I’ve not followed Barry Obama’s progress in any kind of detail, I laid my cards on the table from day one, pinning him down as a messianic commie windbag.

Here in the UK, there were many useful idiots, PC drones and other predictably invertebrate types all backing Barry with a fervour that concerned me greatly.

I truly hope all those individuals are worrying deeply about their pensions today. And that their worry proves to be well founded. Although I suppose many of the same people voted for Blair and Brown, who did phenomenal damage to UK pensions, so I guess they don’t care.

Over in the US, by this time last year, the seppos were so full of themselves, they’d decided that we are a laughing stock. Not so fast said I, I’ve seen your future & you won’t like it.

We’ll see who’s laughing in 8 years time, Yankees….. all of Bazza’s good ideas will be drowned at birth and a whole load of commie, authoritarian, constitution mangling shit will be invading every orifice of your existence.

Let’s have a quick look at how good ole Bazza’s doing, just 16 months into those (he hopes) 8 years. 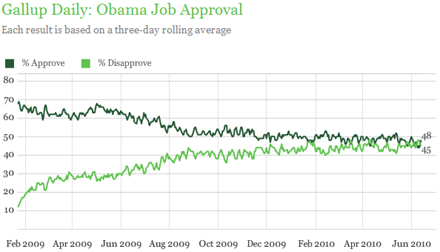 Not brilliant, is it?

So, it’s against this backdrop that I express profound disappointment in apparently sensible people like Dan Hannan, who backed Obama in November 2008. But today, he has belatedly attempted to correct that grave mistake. A pretty good job he has done, too.

His fondness for the EU is matched by his disdain for the United Kingdom. It’s not the diplomatic snubs that bother me: the dissing of Gordon Brown, the insulting gifts, the sending back of Winston Churchill’s bust. It’s not even the faux-anger towards the company he insists on calling “British” Petroleum. (No such firm has existed since the merger of BP and Amoco nine years ago. Thirty-nine per cent of BP shares are American-owned, and 40 per cent British-owned. The stricken rig in the Gulf is owned by Transocean, and the drilling was carried out by Halliburton, yet Obama isn’t demanding compensation from either of these American corporations.)

All these things are minor irritants compared to the way the Obama administration is backing Peronist Argentina’s claim to the Falkland Islands – or, as Obama’s people call them, “the Malvinas”. British troops were the only sizeable contingent to support the US in Iraq and Afghanistan. We have fought alongside America in most of the conflicts of the past hundred years. Yet, when the chips are down, Obama lines up with Hugo Chávez and Daniel Ortega against us.

So.. err… he turned out to be a messianic commie windbag you mean, Dan?