About every 3 months (e.g. see here) for the last 10 years, a story has appeared in the papers that goes pretty much like this:

Under the plans, the limit would fall from 80mg of alcohol per 100ml of blood to 50mg. Anyone caught above the new limit would face an automatic 12-month driving ban, even if they were only marginally over the threshold.

I should point out, this is the first time we’ve heard this story since Philip Hammond lauded the end of the war against motorists.

So, with that in mind, let’s have a look at the basis of this urgent and draconian requirement. The drink driving an accident stats that must have been rising at some rate in order to precipitate this move.

• In 2008, it was estimated that 13,020 reported casualties (6 per cent of all road
casualties) occurred when someone was driving whilst over the legal alcohol limit.

• The provisional number of people estimated to have been killed in drink drive accidents
was 430 in 2008 (17 per cent of all road fatalities), an increase of 20 fatalities compared
to 2007.

Not exactly dramatic, is it? Let’s look at the pretty picture: 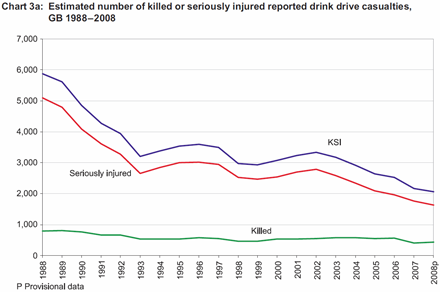 Errr.. okay. So why target alcohol in this way?

Let’s have a look at some of the other causes of road accidents that might perhaps warrant some attention.

Here’s the table – click to enlarge, and I’ll pull a few key stats out below.

Of ALL accidents in the reported 12 month period (right hand column):

So far so good. Now to the point.

Well there we are then. Right there are a load of causes we could do something about, under the heading Poor or incompetent driving.

I despair at the continuous fiddling at the edge which impacts on us all, when some straightforward measures could have a massive impact.

Next, let’s have a look at the trends in these causation statistics. Again, click to enlarge.

See that? The increase in accidents caused by failure to look properly? Over 4 years that delta is equal to the absolute proportion caused by alcohol.

Caused by failing to judge other person’s speed or path – percentage.

Oh – hey – a 1% rise. And 1% is the total proportion of accidents caused by legal and illegal drugs.

Now if only they could break down those failing to look and failing to judge figures by gender. That would be interesting.

In the meantime, ConDems. Shelve this shit and keep your promise to get off our backs, eh?

UPDATE: The Telegraph article points to a suggestion that [weasel word alert] the number of fatalities could be cut be up to 168 a year.

In other words, this report reckons that nearly 40% of drink-driving deaths in 2008 were caused by drivers in the margin between the current 80mg and proposed 50mg limit.

I’ll be interested to know how that estimate was arrived at.

UPDATE 2: Actually, it’s worse than I stated above. The report referred to in the Telegraph, gives the 168 figure for England and Wales only. The Figure of 430 deaths (killed due to alcohol impared driver/rider) refers to Great Britain, so you need to take the Scottish figures (~30 per this) away from the 430.

This pushes the estimated percentage of fatalities caused by drivers in the margin between the current 80mg and proposed 50mg limit much closer to 50%.

To see how badly this figure doesn’t stack up, we’ll now refer to table 3d (p.38) in the “Reported Road Casualties Great Britain: 2008”. Click to enlarge.

In other words, 2% of those motorcyclists killed had blood alcohol levels between the existing and the proposed levels.

In other words, 2% of those drivers killed had blood alcohol levels between the existing and the proposed levels.

This seems to give the big fat whopping lie to the estimated reduction of 40% or more, sold by report author Sir Peter North, the former Principal of Jesus College, as the pay off for this reduction in the limit from 80mg to 50mg.

Disclaimer: I’m not a statistician, so my figures are inevitably somehow flawed, but I don’t think they’re a million miles off.