In my view, David Laws got off to an extremely impressive start as Chief Secretary to the Treasury. Even the anecdotes apparently cast him in a good light.

So my jaw and spirits dropped to the floor as I watched the current imbroglio unfold last night. 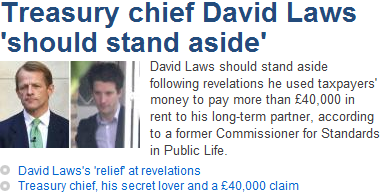 I haven’t read blogs yet today, but I expect there are demands for his head from left, right and centre.

Even given my generous view of Laws so far, I don’t believe he can, or should, survive in his post.

On the face of it, his approach to his expenses lacks probity. Whether he was in breach of the letter or the spirit of rules that are already discredited is neither here nor there.

While Laws must shoulder his responsibility and act with honour, he’s not the only one who got it badly wrong.

Cameron and Clegg both failed to apply rigour in vetting. Each appointment should have been preceded by a process of full discovery and disclosure.

For a start, it’s no big deal to work out what candidates’ potential exposure to the expenses scandal is, without even asking them.

Secondly, if Laws was asked if there was anything Clegg/Cameron should know, and he didn’t disclose at least his expenses exposure, and preferably his other skeletons, then he should not only lose his post in government, he should trigger a by-election and let his constituents decide.

But really, it just doesn’t make any sense. Lots of politicians and others in public life are openly gay. While homophobia can still be found amongst the elderly,the religious and some immigrant groups, I genuinely do not think it forms a part of mainstream British culture in the 21st century.

Who exactly was he hiding this sexuality from? Every one except his other half, it seems. But why?

I mean, in this day and age – and correct me if I’m wrong, gayers – why would you not stick to your guns? We’re here, we’re smoking each others poles, we’re proud, get used to it.

Friends – don’t like that I’m gay? Goodbye and good-riddance.

Family – don’t like that I’m gay? Even easier. Can’t choose them, don’t even need to reflect on one’s own poor choices before ditching them.

If Laws survives, it’s doubtful he would carry the credibility and respect required of whoever is to deliver the debtectomy this country needs over the next few years.

If Laws falls on his sword*, who should replace him?

The most likely candidates are my nightmare, Vince Cable, and our best hope, Philip Hammond.

Selecting Cable would cause uproar on the Tory right. Selecting Hammond would mean replacing a LibDem with a Tory. A pretty big reshuffle would be needed to restore the coalition equilibrium. Less than one month into the administration, both options are inconceivable, particularly after Cameron’s ludicrous scuffle with the 1922 committee last week.

2 thoughts on “Abolishing Laws: Ur doin it wrong.”