Because, having done the stuff I needed to do, I now have CBA syndrome.

I heard Ali Darling on BBC news earlier, spouting the same old lines. Mr Eugenides sums up my response nicely (but do read the whole thing):

Hear this, Darling. You have destroyed the public finances and demeaned the nation’s governance. You have scorched the earth for your successors and ploughed salt into the ruins. You have fucked us so hard, Darling, that we will be walking bow-legged for a generation. How dare you put your mortician’s face above the parapet. Have you no shame?

Fuck off, shut up, and leave us alone. We do not wish to hear from you, ever again.

Well, we kinda knew that already, Jeff, but do go on…

Despite its record of fiscal incompetence, constitutional vandalism and disregard for Middle England, Gordon Brown’s administration ought never to have collapsed. It had, after all, created for itself a client class of supplicant voters. As part of a grand plan for permanent office, more than one million immigrants were handed British passports (80 per cent of first-generation arrivals vote Labour) and 900,000 workers added to the public-sector payroll.

More pernicious still, Mr Brown and his ministers were delighted to overlook a grotesque distortion in the make-up of parliamentary boundaries, which meant that a 30 per cent vote for Labour produced about 300 seats, whereas the same percentage for the Conservatives delivered only 200 seats. In short, just about everything that could have been done to bend the system in New Labour’s favour was in place by the time the election was called.

The problem, however, was that the project had been constructed upon a moral cesspit. The party’s membership had been taken prisoner by a gang of desperadoes who clung to a conviction that honesty and integrity were disposable luxuries, and substance an unwelcome substitute for propaganda. The upshot was a dystopian regime in which Lord Mandelson and Alastair Campbell were recalled from ignominy to orchestrate a campaign of lavish deceit.

Meanwhile, the twatteriti are complaining about having a “feckless fop” like this running the nation’s finances:

I know what they mean. Anyone who could afford a shave back when everything was still black and white were toffs, cads and idlers.

Far better for things to be run by the provisional wing of the David Bellamy fan club. 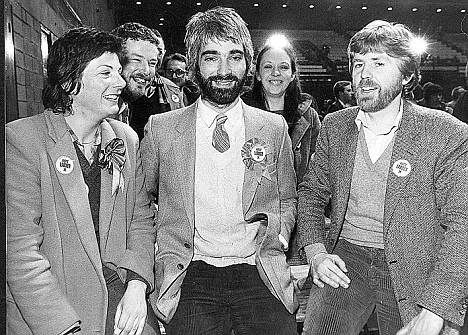 Why can’t these bitter lefties get over the class thing? I was brought up on the breadline, in the North, in a staunch Labour household, yet I don’t appear to be equipped with the same chip as these people. Perhaps it’s because I stopped moaning, got off my arse and did something to put half of Hovis between me and the breadline.

Said twitterist asks, in his profile, “Why should I face years of austerity when there are so many wealthy folk about?”

To which I reply, “Because you voted for the government that caused these years of austerity. I didn’t. Actions have consequences.”

Old Holborn has a nice compare and contrast post on this matter:

If a Libertarian sees a foreign threat, he thinks about how to defeat his enemy.
A Fabian wonders how to surrender gracefully and still look good.

If a Libertarian is down-and-out, he thinks about how to better his situation.
A Fabian demands someone take care of him.

And there’s more… read on.

One thought on “More of other people’s stuff”