Police have warned people not to approach a dangerous giant owl that could be hungry enough to attack and eat domestic pets.

The European eagle owl, which has a 2m (6ft) wingspan and is 1m tall, escaped from an enclosure in its owner’s back garden at Lower Stratton, near Swindon, Wiltshire, on Sunday

A Wiltshire Police spokeswoman said: “The owner went into the enclosure and the owl flew at him. He ducked and the bird flew out.”

“As it has been bred in captivity, the owl is unlikely to attack humans, but it could try to carry off a cat or small dog. If anyone spots the owl they should contact police and we will send an appropriate team with the right sort of equipment to catch it.”

My cats are confined to barracks until further notice. 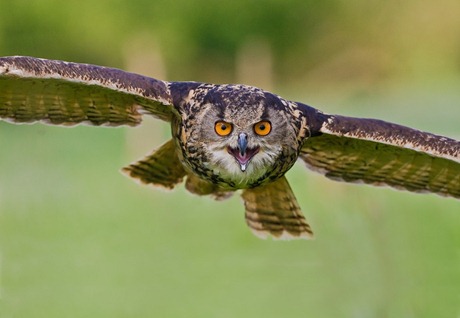