EUReferendum covers many topics. This shouldn’t be a surprise, considering how much of our legislation is handed down from the EU. Domestic recycling has been driven by the EU landfill directive. I don’t have the details here, but I – like you – do have google.

An exercise in applied insanity 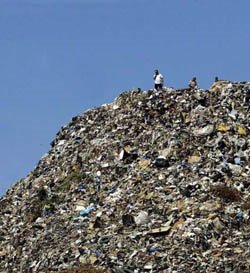 Some of us probably remember jeering at the greenie Germans who got the recycling bug and ended up renting huge warehouses to store all the unwanted material they had collected.

Well, it is now happening here, with The Times reporting that “thousands of tons of rubbish collected from household recycling bins may have to be stored in warehouses and former military bases to save them from being dumped after a collapse in prices.”

Collection companies and councils, we are told, are running out of space to store paper, plastic bottles and steel cans because prices are so low that the materials cannot be shifted. Collections of mixed plastics, mixed paper and steel reached record levels in the summer but the “bottom fell out of the market” and they are now worthless.

This is actually only half the story and the clue as to what is really happening is given in the next bit of the story, where The Times notes that the plunge in prices was caused by “a sudden fall in demand for recycled materials, especially from China, as manufacturers reduced their output in line with the global economic downturn.

What we all know is that the bulk of the so-called “recycled” material has been loaded on slow boats to China, where it has been “reprocessed” under appalling conditions, recorded many times. But as long as local authorities could get the waste off their books, honour was satisfied and quotas were deemed filled.

Now, with the Chinese economy going into freefall and manufacturers going bankrupt in droves, cheap Chinese goods are no longer pouring into the UK, so there are no empty ships to take our rubbish as ballast for the return journey.
So it is that “recyclers” are urgently asking the Environment Agency and the Department for Environment, Food and Rural Affairs to change draconian regulations on the storage of recycled waste so we can store the unwanted waste – stuff that not even the Chinese want any more.

But, in a classic example of “disconnect”, Jane Kennedy, waste and recycling minister, is congratulating local authorities in England for reaching a 34.5 percent recycling rate, entirely heedless of the fact that their expensive separate collection systems are merely creating a massive storage problem, loading still further expense onto hard-pressed council tax payers.

Still though, the madness goes on, with councils and council tax payers facing fines of up to £3 billion if they do not “reduce the amount of waste thrown into landfill,” instead having to pay for it to be stored on disused airfields until – some day when these too are full, someone will undoubtedly make the brave decision that the waste should be landfilled.

If there is a better example of the insanity both of the greenie agenda and of modern government, it would be very hard to find. It really does take a special kind of genius to screw up our waste management system so comprehensively.

One thought on “Recycling? No – just bugger off!”